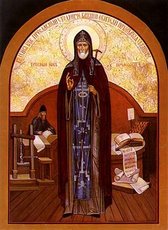 The Venerable of Pochaev, Abbot and Wonderworker of Pochaev, was a monastic and abbot of the Pochaev Lavra in Volhynia for fifty years, He defended Orthodoxy against the persecutions engendered in the Union of Brest. He was a quiet ascetic, yet a prolific writer who used the new printing press to teach and reach the faithful. 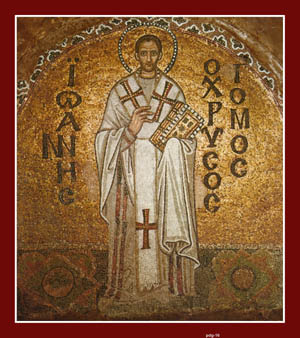 St. John Chrysostom (c. 347–407) Archbishop of Constantinople, was an important early Church Father. He is known for his eloquence in preaching and public speaking, his denunciation of abuse of authority by both ecclesiastical and political leaders, the Divine Liturgy of St. John Chrysostom, and his ascetic sensibilities. After his death (or, according to some sources, during his life) he was given the Greek surname chrysostomos, meaning "golden mouthed", rendered in English as Chrysostom.