Accepted writings, but NOT doctrine.  They never contradict the teachings of the Church, and are considered beneficial, yet are not doctrine.

The Didache, also called The Teaching (or Doctrine) of the Twelve Apostles, is a short treatise that dates back to the early Christian Church and was accounted by some of the Fathers as next to Holy Scripture. It was probably written in during the second half of the 1st century, although some scholars suggest a 2nd-century composition.  The first part of the Didache is a moral treatise describing the , the Way of Life and the Way of Death. The second and third parts contain instructions on baptism, the Eucharist, fasting, prayer, matters of church organization, apostles and teachers, prophets, bishops, and deacons. The Didache is perhaps the first text to append a doxology to the Lord's Prayer: "...for thine is the power and the glory unto all ages."

The Epistle of Barnabas, also known as Pseudo-Barnabas, is a Christian work of the late first or early second century, written to dissuade its readers from being influenced by Christian Judaism or even to consider the Jews as sharing in God's covenant. It was written in Greek and currently contains 21 brief chapters, preserved complete in the fourth-century Codex Sinaiticus where it appears at the end of the New Testament.  The epistle goes farther in its anti-Jewish stance than earlier Christian works, by arguing that God's covenant with Abraham and Moses was never established with the Jewish people as a whole, due to their sins. It was ultimately omitted from the New Testament canon, although and it was cited by several early Church Fathers as having scriptural authority.

The Protevangelion of James, also sometimes known as the Gospel of James or the Infancy Gospel of James, is generally dated to the 2nd century AD. It is an apocryphal gospel that was widely read but never accepted into the New Testament Canon. The document presents itself as written by James: "I, James, wrote this history in ." Thus the purported author is James the Just, the brother of Jesus. Over one hundred and forty Greek manuscripts containing the Gospel of James have been discovered. The echoes and parallels of the Old Testament appear to derive from its use of Septuagint phraseology. As far as content, it dedicates a significant portion not to the circumstances of Jesus' birth, but to the birth and life of Mary. This is the earliest text that explicitly claims that Joseph was a widower, with children, at the time that Mary was entrusted to his care. The first mention of the Protoevangelion is by Origen, who refers to the work as the Book of James. Many critics feel that the work is a composite of other works or existing traditions.

The Shepherd of Hermas is a text from the very early Christian church of the second century, during the period in which the New Testament was being canonized. A popular text during the second and third centuries, the Shepherd was considered scriptural by many of the theologians of the time. It is written as a call to repentance and adherence to a strict moralistic life.  Of note is that the Codex Sinaiticus of the mid third century contains a copy of the Shepherd of Hermas at the end of the New Testament, illustrating its popularity at that time.  See also Codex Sinaticus. 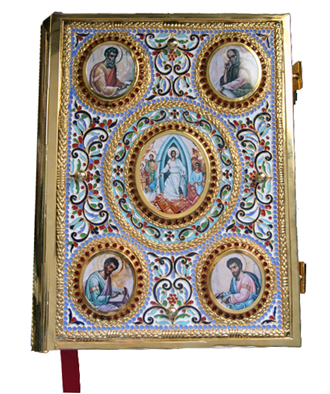 Orthodox Hermeneutics (from Greek hermeneutikos) is the interpretation of a text, particularly the text of Holy Scripture. The word literally means "interpretation" (in its basic sense, interpreting a foreign language into one familiar to the listener) but can also refer to "explanation." It is this latter sense which is meant when referring to Biblical hermeneutics. In the Orthodox Christian Church, the practice of hermeneutics is according to basic principles (presuppositions) which are manifest in the life of the Church.