PACER (Public Access to Court Electronic Records) provides exactly what the name implies: electronic public access to federal court records...for a fee.  Searches on PACER can quickly become expensive, so make sure to check with your place of employment on their policy for searching through PACER.  Your employer may also have access to Dockets through another service like Westlaw or Lexis.

As a UST Law Student, you have access to Bloomberg Law which includes a subscription to Docket Search.  This resource pulls from PACER itself, and the Law Library highly recommends using it when looking for a Docket (just note that access to State records is included, but the scope of that reach varies by jurisdiction).  See the Bloomberg Law Docket box below for instructions on how to use Bloomberg's Dockets Search.

For Minnesota Trial Courts, you can find Dockets through Minnesota Court Records Online (MCRO).  See the Minnesota box below for instructions on how to search MCRO.

Will I Know It When I See It?

Docket sheets provide a general overview of who is involved in a case and what actions they have taken.

The specific format varies from court to court, but most docket sheets include, in order:

The sample docket sheet below shows these basic elements. 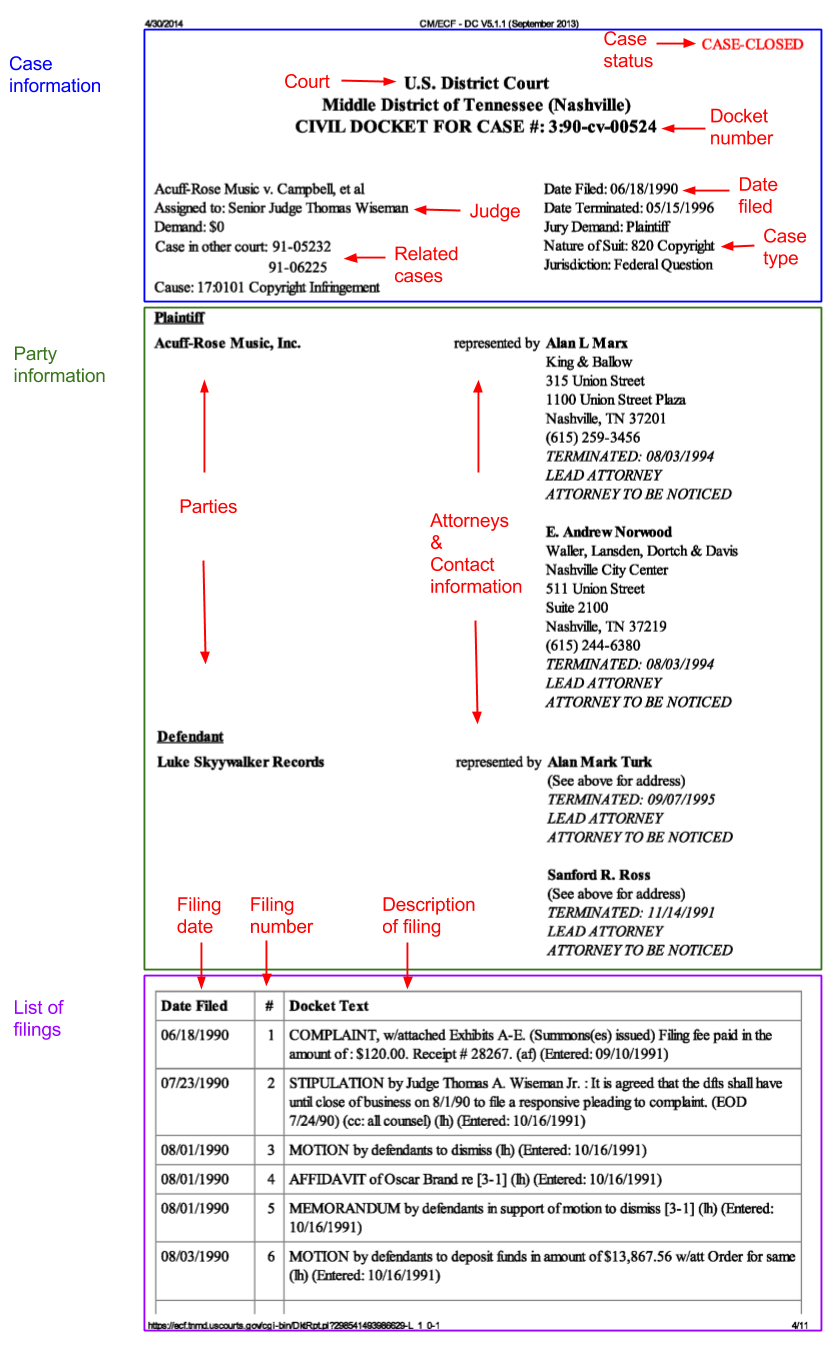 Each court generally has its own system for assigning docket numbers, which may include some or all of the following:

To learn how a specific court assigns docket numbers, check:

Common sources of confusion include:

In the Minnesota District Courts, docket numbers are formatted as follows:

A "standard" case number in Federal District Courts appears as:

A = a single digit number representing the filing location.

TT = a one or two letter code indicating the type of case.

NNNNN = a one to five digit number. Some courts may omit the filing location number and/or the two-letter "Case type" code. As such, Westlaw will accept the following case number citation formats for search purposes:

Individual courts may add dashes, letters and numbers representing a particular judge's initials and/or courtroom/routing numbers (e.g. 99-M- 5011-ALL or 00-CR-5-S-01). These additional keystrokes beyond the standard case number format should NOT be included when performing a search.

The "standard" case number format in the Federal Courts of Appeal and the U.S. Bankruptcy Courts is:

NoS codes can help you search for cases by type but keep in mind:

As a result, it's usually best to experiment with both keyword and NoS searches.

Your UST Law Student status gives you access to Bloomberg Law (if you have not created your account and are not sure how to do so, please email lawreference@stthomas.edu).  Bloomberg Law is great for a lot of things, but it's best known around these parts for Dockets Search.  Dockets Search is a great benefit to UST, but small warning, it does come with a cost. Through our institutional subscription each student has access to search and view dockets, and each search goes against our institutional spending limit.  No need to worry too much about it, you will hear from the Law Library if we see any spending getting too high!  However, if you ever have questions about how to perform a Docket search, or what is covered under our subscriptions, contact a Friendly Law Librarian for help.

If you have a citation to a case, access the case on Bloomberg and then check the sidebar for a Related Docket(s) link to view any available dockets and court documents. 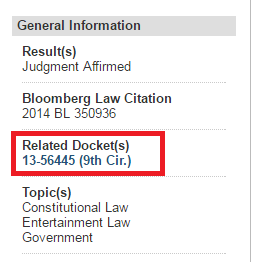 If you do not have a citation to a case, you can search dockets and court documents directly using Dockets Search:

The Dockets Search form allows you to search by keyword, court, party, judge, docket number, and date. Under More Options, you can also search by attorney/firm, case number, and case status. Keep in mind:

The form ends with options customized to specific courts. For example:

Once you have accessed a docket on Bloomberg through Related Docket(s) or Dockets Search, you can view or request some or all of the court documents listed on the docket.

Click "Request" next to any document to ask Bloomberg to retrieve it.

Click "View" next to any document to view it instantly. Bloomberg allows you to instantly view any document that any user has previously requested, whether they requested it through PACER, a state e-filing system, or by paying Bloomberg's couriers to visit the court in person and retrieve it manually. 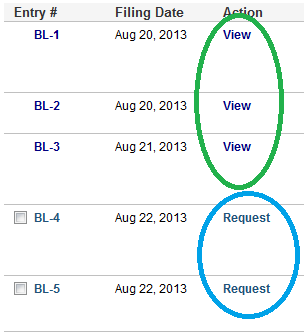 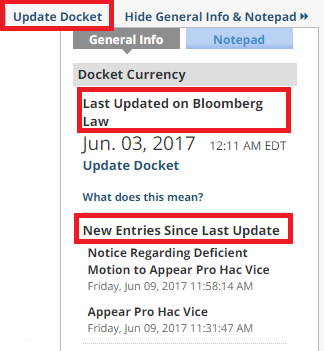 MCRO will eventually replace MPA Remote as the online platform for public access to district court records. MPA Remote will continue to be fully accessible to the public until all three phases of the MCRO rollout are complete.

During Phase 1, documents filed in a case became accessible when searching with the case number.

Currently, during Phase 2, there is a new Case Search tab that allows users to search for cases by person name, business name, attorney name, case number, citation number, or attorney bar number. Case Search provides access to a Register of Actions (case details) for each case, as well as public documents filed in each case. The Document Search tab continues to be available, where users can search by case number to find documents in cases that are available online. While there is no charge for documents at this time, when MCRO is fully implemented, there will be a charge per document.

Not Finding What You Need? Go to the Courthouse

The Minnesota Supreme Court and Court of Appeals offer online access to court opinions and case records through the public view of the Minnesota Appellate Courts Case Management System (P-MACS).