Writings of the Fathers

There have been many editions of the texts of the early Church Fathers over time.

If you know French, you can use the prestigious Sources Chretiennes series, which contain both Latin texts and new French translations.

Primary Source Collections  - you will find connections to the following sources on the left side of this page....

The most important source collection of hagiographical works (works about saints' lives) is Acta Sanctorum. However, it is supplemented by a number of other important sources. The most historically significant collections of patristic and other religious writings are Migne's Patrologia Latina and Patrologiae Graecae. However, the writings in these collections are often uncritical and filled with errors. The newer, critical Corpus Christianorum series and other critical collections largely supersede the Migne collections. Both of the Migne collections as well as the Corpus Christianorum are available in online versions, although these versions can be difficult to use and are currently incomplete.

A vast collection of the biographies of saints, including their writings, with commentary and annotations. Arranged by saints' days. Index in v. 62.

Includes both the Patrologia Latina (and Supplementum) and the Patrologiae Graecae. It has to some extent been superseded by the Corpus Christianorum. Contains some errors and poor editions.

Supplements the Corpus Christianorum with texts from late Antiquity and the very early Middle Ages. Abbreviated as CSEL, this work of German scholarship covers the Latin writers. Referred to as the Vienna Corpus, each volume includes an introduction to the text, bibliographical notes, and indexes of names, places, and subjects.

A major database for Latin texts. It contains texts from the beginning of Latin literature (Livius Andronicus, 240 BC) through to the texts of the Second Vatican Council (1962-1965). It covers all the works from the classical period, the most important patristic works, a very extensive corpus of Medieval Latin literature as well as more recent works including texts from the Reformation and Counter-Reformation. Here the complete works of writers such as Cicero, Virgil, Augustine, Jerome, or Gregory the Great, etc., can be searched. The texts have been taken from the Corpus Christianorum series and from many other leading editions.

An important series of critical editions with commentaries published in France beginning in 1941. Greek/Latin on left side; French translation on right side. Primary focus is on authors from the 6th century and earlier, but more recent editions include later works.

The series aims to contain a list of all the Fathers of the Church who wrote in Greek from the 1st to the 8th centuries. For each it lists all their works, whether genuine or not, extant or not. The text is in Latin.

A list of all the Christian Latin texts from Tertullian in the second century to Bede. Each work is properly identified, and the best editions are noted, as are the newly found manuscripts, etc.

The TLG is the major resource for searching and analyzing Greek texts of the classical, patristic, and medieval eras. A digital collection of most literary texts written in Greek from Homer to the fall of Byzantium in 1453 C.E. TLG currently provides access to 3,700 authors and 12,000 works.

German. Many volumes since 1897-continuing. Abbreviated GCS. The most important collection of Greek patristic texts.

The Classics of Western Spirituality (CWS)

The Faith of the Early Fathers, 3 volumes

The Fathers of the Church

Nicene and Post-Nicene Fathers-Series I (NPNF)

This print series seeks to update the works of Migne and create critical editions reflecting contemporary scholarship and research. Each volume provides introductory material and a description of the manuscript tradition.

Ireland Library subscribes to the online version (A & B series) 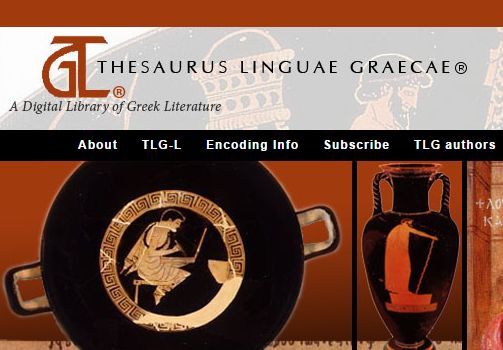 The Thesaurus Linguae Graecae is a digital library of Greek literature currently including most literary texts written in Greek from Homer to the fall of Byzantium. More than 3,800 authors and in excess of 12,000 full-text works are included. The database provides information about the names, dates, geographical origins, and descriptive epithets for each author, together with detailed bibliographical information about existing text editions for each work.

Users can search the full database, limit searches by Author, Work or Publication, or browse a selected Author (e.g., Homerus) from an alphabetical menu. Advanced Search permits combination of different terms in one search.

10. Literatures of the World in English Translation: A Bibliography: Volume 1: The Greek and Latin Literatures.

For the experienced searcher only!

This intimidating and difficult site provides the full text of many very hard to find church documents, like a full set of council documents known as Mansi